Sleep eluded Samad one night. It was not as if he had something on his mind, like an unkind remark someone had made that perturbed him enough to keep him awake.

He was hot and feverish the following morning. Panadol did little to arrest his fever. That evening he threw up several times. Time to have this checked out I thought.

There was a huge crowd at the Damansara Specialist Hospital Emergency. “Luar biasa!” (extraordinary night) remarked the check-in counter nurse. She took his temperature and blood pressure readings before leading him to a bed in the adjoining area, a room so cold Samad shivered and pleaded for extra blankets.

It may be a viral infection, observed the Emergency doctor, when she finally appeared. She gave him a jab, prescribed some medication and sent him home.

Tired and listless Samad lay in bed the following two days sleeping fitfully. When he started throwing up again I called Dr Zainuddin, his regular doctor at the hospital. Bring him in without delay, he said.

A blood test confirmed my worst fears. Samad had dengue. He had a platelet count of 112.

The Ebola epidemic has hogged world headlines but dengue has infected more than 500 million worldwide. In Malaysia the disease, caused by the Aedes mosquito, has become a serious killer. The statistics are alarming. There was a 200 percent increase in cases and deaths this past year despite vigorous campaigns to get people to eliminate areas of stagnant water where the mosquito breeds.

As I listened to Dr Zainuddin a slow dread built up inside me. We are fighting a losing battle with dengue, he said. There is no cure and research to develop a vaccine for it has made negligible progress.

We secured Room 537, Mesra Medical Ward on the fifth floor after waiting close to four hours.

Samad had scored a first. In his 78 years this was the first time that he’d found himself admitted to a hospital as a patient.

Requiring intravenous hydration he winced as a nurse repeatedly attempted and eventually succeeded in locating a vein in his wrist in which to insert a branula for the drip. From then on he slept shackled to the drip machine.

I drove home to get some things for our hospital stay, returned to find Samad asleep and crashed on the sofa next to his bed.

Early the next morning the punishing routine of extracting blood began. Samad had to endure painful blood extractions daily, often twice a day. He probably holds a record of sorts for having deep, well-concealed arm veins. The procedure began with the nurse palpating a vein to assess its elasticity, anchoring it, pulling taut the skin around it and having Samad clench his fist. When things went wrong Samad would flinch or become belligerent and send the nurse scurrying out.

I heard a loud gasp one night, woke up, eyes gummy with sleep, to find Samad awash with blood. His clothes, pillow and a corner of his bed were soaked and a pool of blood had gathered on the floor. 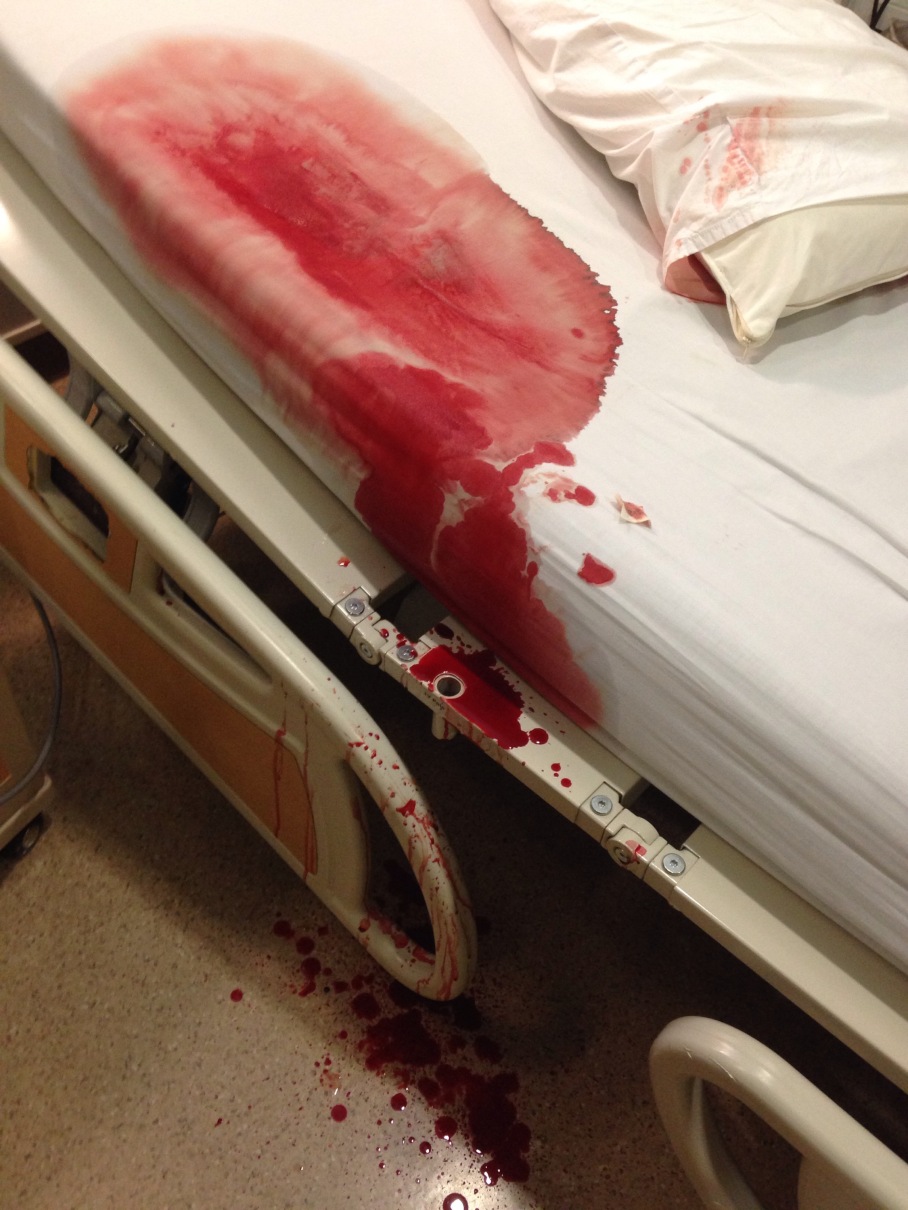 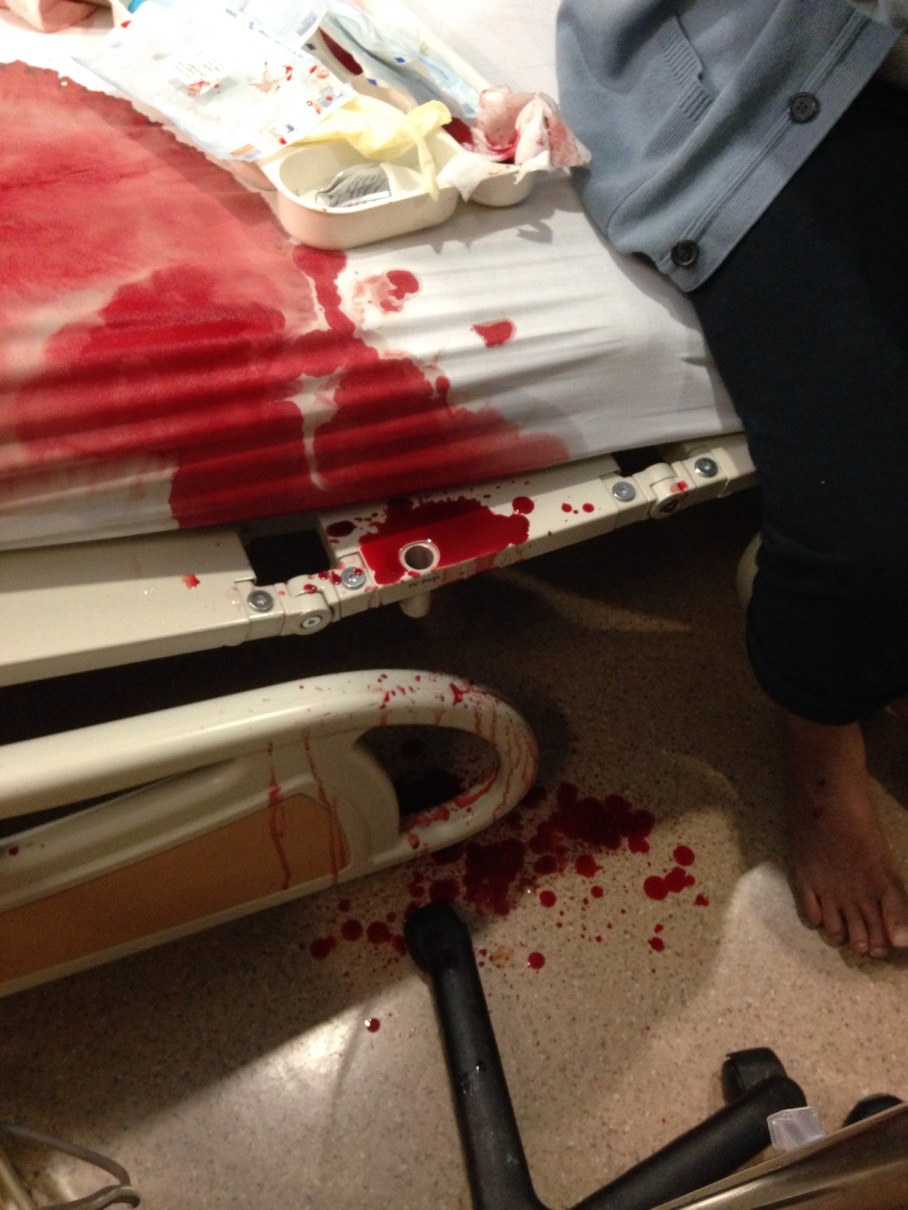 Is a branula inclined to do that, leak blood profusely? What if Samad had not woken up? Would he have bled severely? I was merely told that Samad had jolted his hand and dislodged the branula.

Samad’s platelet count continued to drop, from 112 to 95 to 45 and then to 39. With growing panic I coaxed him to drink some of the papaya leaf extract, said to be able to counteract the disease, served with his breakfast. He took a sip of the bitter green liquid, shuddered and spat it out.

He had no desire for food, declining the wholesome hospital meals and opting instead for bits of watermelon, papaya and guava.

I was immensely grateful that Samad was spared the worst symptoms of the disease, persistent vomiting, bleeding and severe muscle and joint pains causing dengue to earn the name breakbone fever.

Our son Amir and family dropped in to find Samad confused and disoriented, unable to recall recent events including the people who had visited him. Amir remembered how his sister Aida had had temporary memory loss after being thrown off a horse.

Do you miss your gym? Amir ventured to ask him, referring to the house gym where he had delighted in spending long hours exerting himself every day. What gym? Where? Samad had no memory of it. He wanted to know why Aris had not visited him and there was little we could do to convince him Aris was many miles away.

Disturbing though it was Amir discerned a comical side to his father’s wooziness and couldn’t resist a chuckle or two.

On the sixth day came the long-awaited news. His platelet level had gone up to 78. Intravenous hydration was discontinued, putting an end to the noisy dragging of the drip machine to the washroom day and night. His fever subsided. He asked for ice-cream and donuts.

We received more good news the following day. His platelet count had shot up to 119 which made it 90 percent of normal. Samad was discharged the same day.

With the return of his appetite came the desire to exercise. He had missed his beloved gym, his weights, workout station and row of cardio-vascular machines. He felt alert and energetic and in no time at all was exerting himself with all his old vigor and passion.

It was not long before the dreadful infection he had suffered and all the pain he had endured became a distant memory.

One thought on “Dengue”