Six days before we were to meet our son Aris and his friend Sarah in London I received a WhatsApp photo from him captioned, “Uh! Oh!” He was in a pair of crutches flashing a smile. 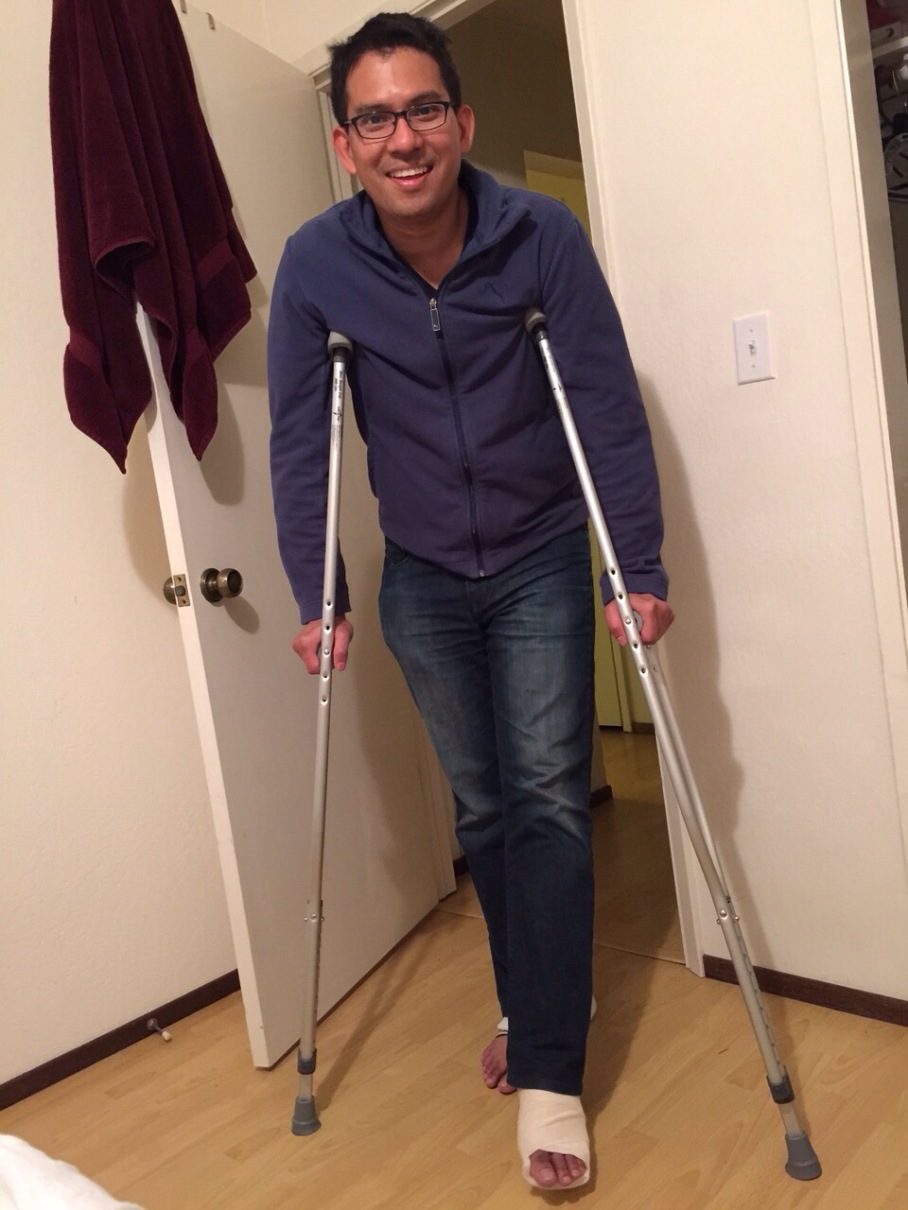 Following a furious exchange of messages I learned he had fractured his left ankle while playing ice-hockey. His ankle bones showed a 5mm separation and he needed surgery. Samad and I were saddened that he had to abandon our family reunion in London.

Our London Airport taxi deposited us at 21 Maur Road in Fulham. I rang the bell, the door flew open, and there they were – our daughter Aida, Aida’s girls, Lilly (10) and Nora (8)  and Sarah, with welcoming smiles on their faces. We exchanged hugs and kisses. A little later, Aida’s husband Brad appeared. He’d been waiting at the nearby Parson’s Green tube station to help us with our bags. Dear, thoughtful Brad.

Lilly and Nora quickly overcame their shyness and insisted on a house tour. They tripped lightly up the wooden steps of the 3-story house while I scrabbled to keep pace with them.

This is your bedroom! said Lilly with a theatrical flourish that instantly won my heart. The room was large and bright and overlooked the street below. 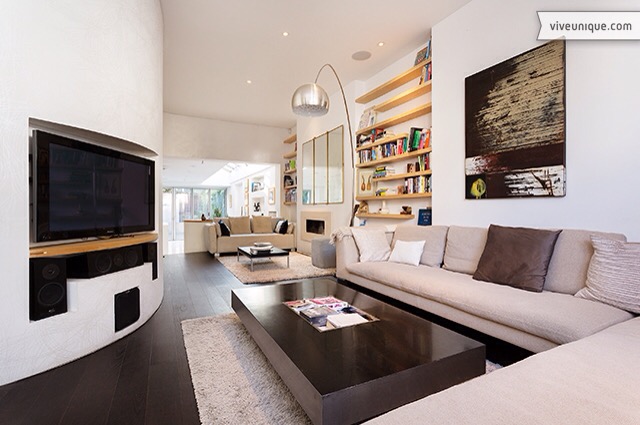 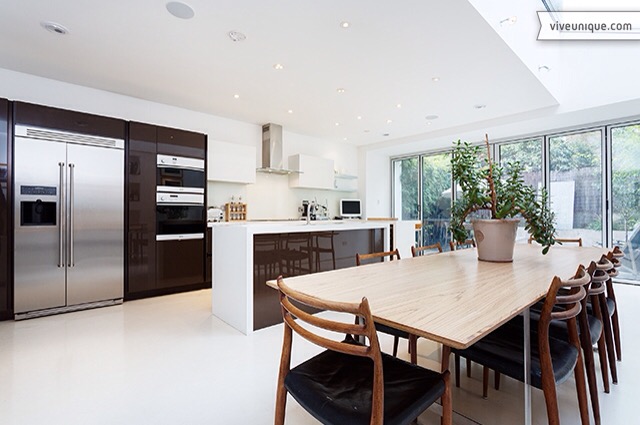 The five-bedroom house Aida had secured through Air BNB was located in the upmarket borough of Fulham. I loved the way it opened onto the hallway to the spacious open plan living area painted white, in contrast to the dark wood floors. The sleek kitchen with its modern amenities faced a long wooden dining table. The paved outdoor garden had a little waterfall.

There was space aplenty for Lilly, the New Hampshire Junior Olympics level 3 gymnast, to perform her strenuous tumbles and twirls and Nora her balletic leaps.

Aida, Brad and Sarah raided the nearby Dalcha Indian restaurant and we enjoyed their specialty dishes for dinner. That was when Lilly first got hooked on chicken tandoori, so soft and moist it melted off the bone. She asked for Tandoori at every Indian meal after that. It was chicken curry all the way for Nora.

Breakfast had hardly begun the following day when Samad jauntily set off for a bit of exploring. As we were to learn later, he’d covered a fair distance before he tripped and sprawled on the pavement. Groaning in pain he clutched his injured right leg, unable to move. He attracted a large crowd. Some people helped him up and led him to the nearby Hive coffee shop where a lady sat him down at a table and offered him a cup of capucino. After half-an-hour he felt better and limped back to the house. Declining to see a doctor he decided to rest and watch some television. But he couldn’t turn the set on.

This house is too hi-tech for me, he concluded huffily. He’d also been put off by the odd arrangement of the living-room dimmer lights. But what really got him was the alarm system, how you had to dash to the alarm board, after opening the front door, to switch it off before it triggered and disturbed the whole neighbourhood.

Aida and her family had arrived ahead of us and had watched the Changing of the Guards at Buckingham Palace, taken the hop-on-hop-off bus to Big Ben, seen the London Dungeon show, strolled along Oxford Street and enjoyed Indian food at Brick Lane’s Chillies Restaurant.

A high point for them was the Hairy Goat Mystery Photography Tour. Tour Leader Corinna took them on an exhausting 3-hour walk around the Bank and Monument area showing them hidden gems from a photographer’s perspective. They were astonished to see their reflections in a little ashtray. After visiting a Christopher Wren church they strolled in Leadenhall Market where many of the exterior shots of Harry Potter’s Diagon Alley was filmed, including the blue door (see picture below) that led to the Leaky Cauldron in the movie. Needless to say the girls had a rollicking good time.

This blue door was used as the entrance into the leaky cauldron in “Harry Potter and the Goblet of Fire”.

Aida and her daughter Lilly’s reflection in an ashtray.

(The above five photos courtesy of Aida Maher)

When shall we go see Les Miserables? Lilly asked. The day arrived soon enough and we all trotted to the Queen’s Theatre. I was able to put the absent Aris’s ticket to good use.

The Apollo Theatre right next to the Queen’s was showing “The Audience”, with Kristen Scott Thomas, a play that imagined weekly meetings between the Queen and eight of her Prime Ministers. Samad, an ardent fan of stories about the British Royal family, leaped at the opportunity to see it.

Les Miserables, based on Victor Hugo’s novel, is probably one of theatrical history’s most celebrated musicals. It enthralled us all and the girls couldn’t stop singing their favourite songs from it when we got home – “Master of the House”, “I Dreamed a Dream”, “Look Down”, and “Bring Him Home”.

Sarah made a trip to Oxford, not to contemplate its famous “dreaming spires” nor to cross its Bridge of Sighs. But to meet up with Prof. Hugo Slim, the independent reviewer of her PhD thesis, “Rethinking Humanitarian Accountability : Implementation of Reproductive Health Services in Complex Emergencies”. He had loved her thesis and given it top marks. Sarah spent a good part of the day with him. Intellectual brilliance aside the Prof was a Hugh Grant look-alike, albeit a slightly older version of the actor. She returned from Oxford with a glow on her face!

While Sarah went to Oxford, we took a long train ride to Barking in East London to visit Samad’s brother Ismail. In a tragic turn of events Ismail suffered a stroke six years ago that confined him to a wheel chair but mercifully left his speech and mental capability intact, including his sparkling sense of humour. His wife Hamidah works at the Brunei Students Department so a caregiver attends to him every afternoon. We were warmly received by the family which includes their lovely daughters Rozanna and Suraya. Ever the generous host, Hamidah’s table groaned with delicious food. We couldn’t have enough of her lamb briyani. 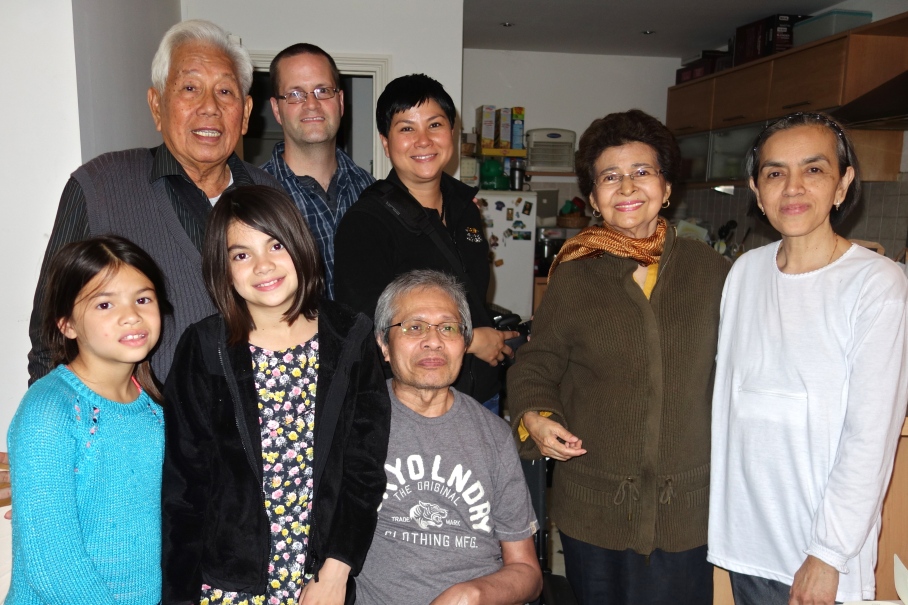 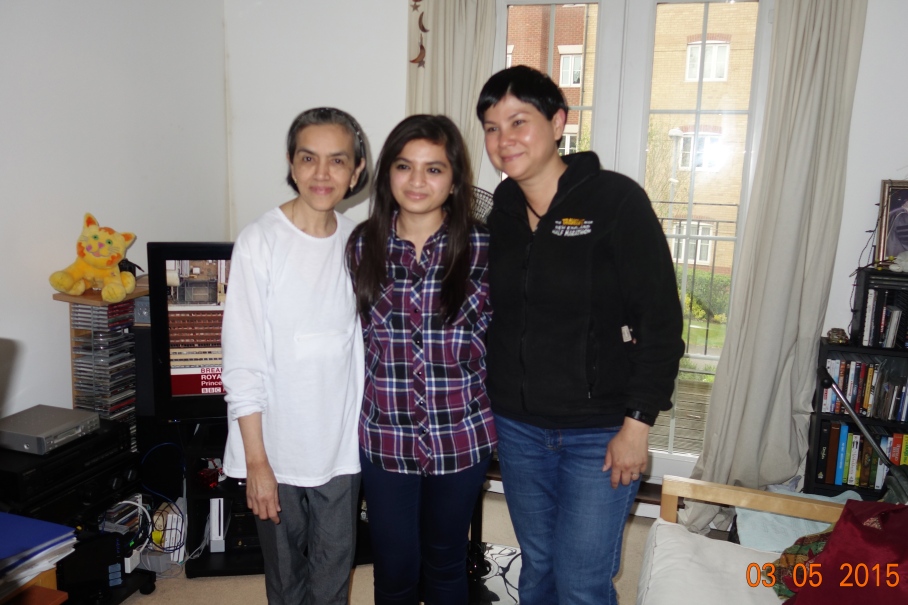 While the rest of us ate and chatted, Aida kept her eyes glued to the TV set, excitedly awaiting the arrival of Princess Charlotte of Cambridge, daughter of Catherine, Duchess of Cambridge. We had to depart Barking before the baby arrived but Aida happily saw her cradled in her mother’s arms on the TV in her hotel room.

Sadly, Aida and her family left to return to New Hampshire the following day and Sarah flew to Germany to visit her grandmother. Left to our own devices, Samad and I watched a couple of movies, shopped for gifts and exhausted ourselves stomping around London’s busy streets.

After going round in circles, we eventually found a train that took us to Brick Lane or Banglatown, the heart of London’s Bangladesh community. The Jamme Masjid or Great London Mosque was there. It was difficult to imagine even the skinniest muezzin creeping into its tall thin minaret to give the call to prayer.

Curry houses lined both sides of the long street and people in traditional clothes were everywhere.

We spotted the Chillies Restaurant Aida had raved about. Samad found its combination lamb, chicken and shrimp briyani “amazing” while I savoured every bit of my fish Jalfrezi.

We spent our last few days in London catching up with a few friends. We had lunch with Zaharah Othman and her husband Wan Hulaimi at TukDin, a Malay restaurant near Paddington Square. Zaharah and Wan have lived more years in London than in Malaysia. A former Mass Communications student of mine at the MARA Institute of Technology she has done me proud as a successful writer and journalist. But she insists I not forget she’s now a grandmother. And a glamorous one she is too!

Raja Amilia, Zaharah and me.

Happily another former Mass Communications student of mine, Raja Amilia, was also able to join us for lunch. She was holidaying in London with her three children.

Wan Hulaimi, Zaharah’s husband, who goes by the pseudonym Awang Goneng, has written three books, two on Trengganu and one on Selangor. I found his, “Growing Up in Trengganu”, a collection of memories of his colorful kampong childhood, a delight to read. It is peppered with “Trengganuspeak” which I found really hard to grasp and it eluded me all the way to the end of the book.

We next met up with Mariam and her husband Keith who live in a lovely tree lined road just off the Shepherd’s Bush called Hammersmith Grove. Mariam has long made London her home. We gladly accepted her lunch invitation and headed to their home in the company of Ismail’s wife Hamidah and her daughters. 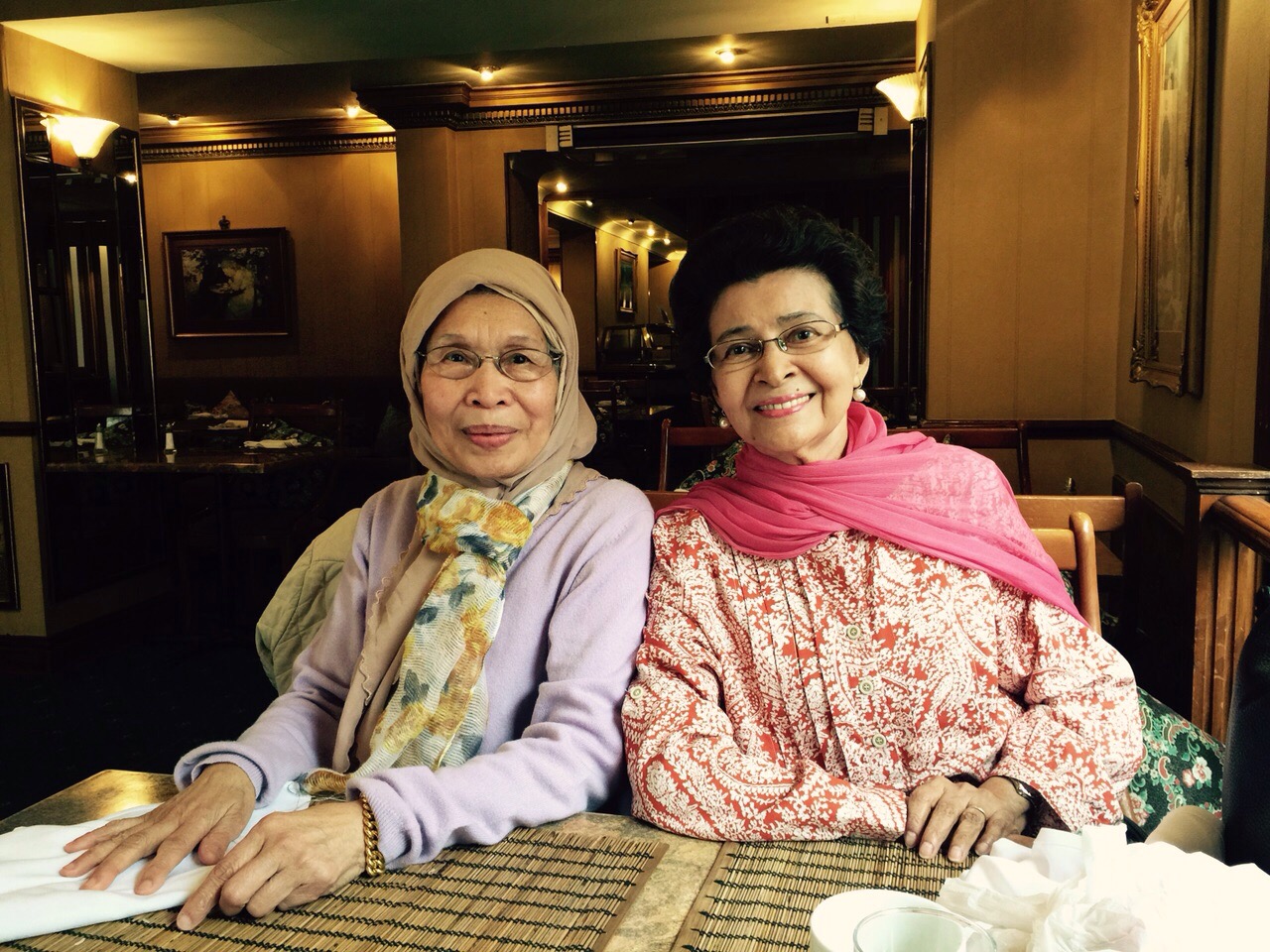 Mariam’s daughter Suriati or Suri for short is a remarkable young lady. She owns and runs an elegant Bed and Breakfast, Holland Park House, which is doing a brisk business. She plays the guitar and piano, composes songs and sings weekly at Genie’s Hollands Restaurant and Wine Bar at Portland Road close to where she lives. 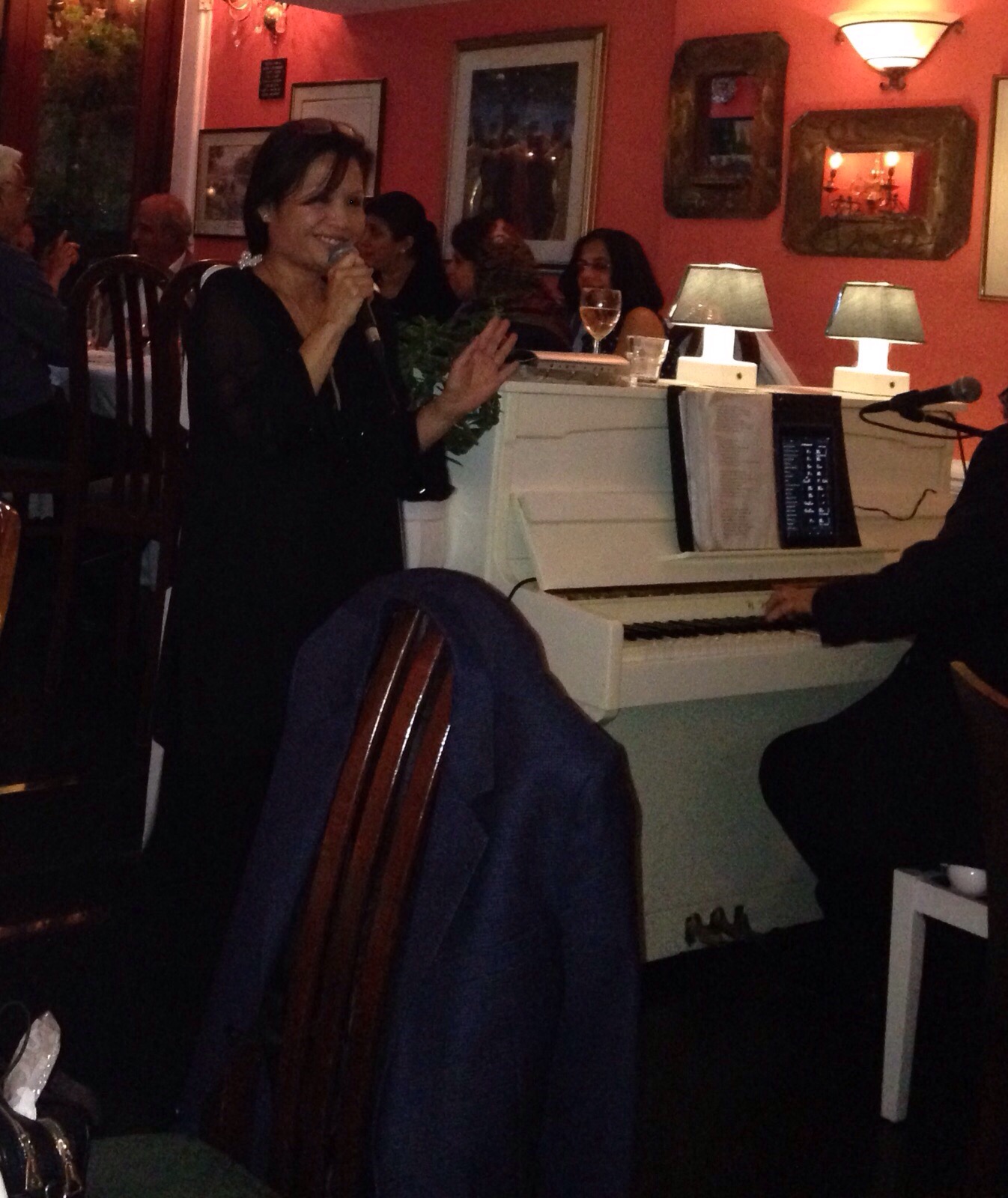 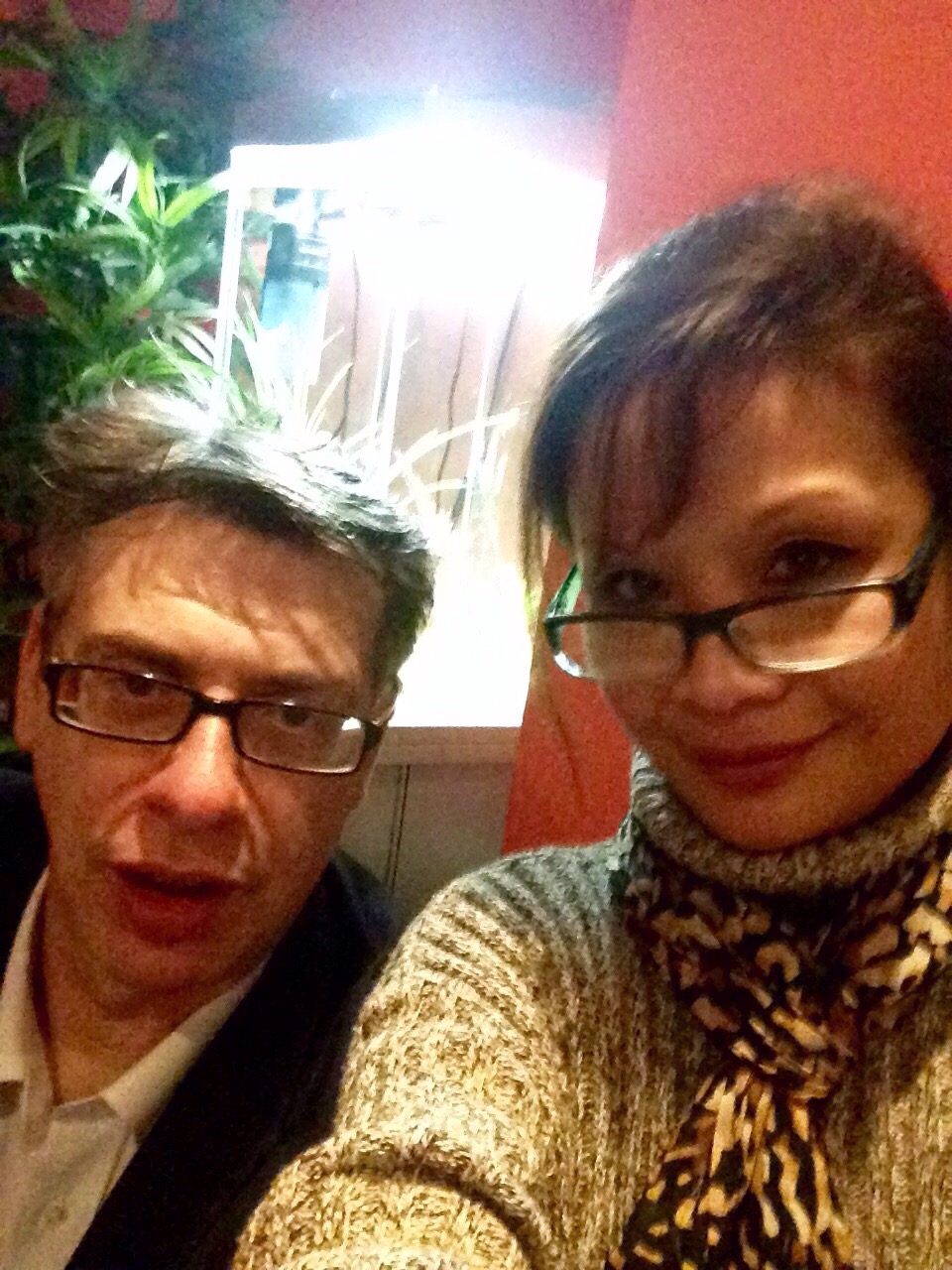 Her gem of a first album, “Untold Story” featuring her original compositions plus a couple of Jazz standards has been described as “Beach Jazz” because of it’s easy listening quality. She’s now working on her second album.

In the plane heading home I thought how splendid it would be for Suri to entertain audiences in Kuala Lumpur. And I made up my mind to find a way to help her seek entry into the KL music scene.