On our fourth morning in Beijing our guide Musa told us we were headed for a free foot massage. There was no such item in our itinerary but his announcement cheered us. Nothing like a traditional Chinese rubdown to soothe aching muscles and sore feet unused to so much tramping around in this huge city. And for free too!

We arrived at the massage place and as we walked towards the massage room we saw pictures of the current and former Prime Ministers of Malaysia along the corridor. We were in good company!

The armchairs in the room were arranged theatre style. Enter the massage people with basins of water, oils and other trappings of their trade. Feet were immersed in the water which was warm and fragrant and the rubbing and kneading began.

He concluded his talk, smiled more widely, and left the room followed by the massage people. A herd of Chinese (Manadarin speaking) doctors with their interpreters who came in next took us separately into small rooms.

My husband Samad was made to lie down on a bed. Dr Mo who attended to him rubbed some oil on his stomach producing angry red welts. You have many diseases in your body, Dr Mo said. Samad leapt out of the bed in a hurry, not caring to know  what those diseases might be, and we rejoined the others in the main room.

With a shock we noticed that Md Nor had purchased an assortment of medication that filled a huge carry bag and had spent a whopping RM30,000 (USD7,500) for them.

Had he let his guard down? Or had he been charmed by the smiling Indonesian? We knew he had knee problems and had contemplated knee replacement surgery. “I’m doing this because I’m deeply concerned about my health” he told us. His dear wife Rokiah understood immediately.

Samad and young Rookie were enticed to part with RM5,000 (USD1,250) each for various medicines. The other five ladies in our group strongly resisted Pak Johnny’s charms and held on tightly to their credit cards. 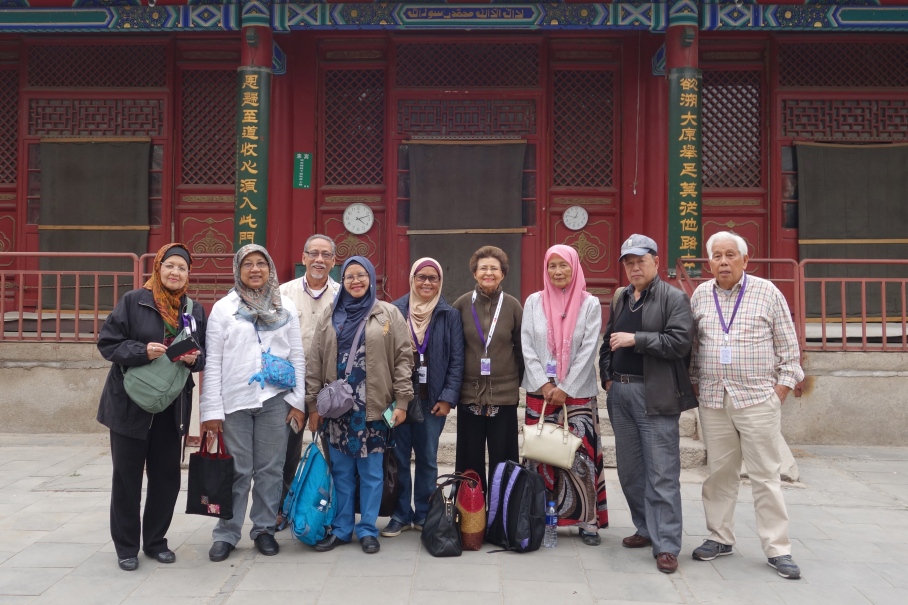 Our group in front of a mosque. From left, Kaziah, Rokiah, Md Nor, Rookie, Ani, Marina (writer), Maznah, Musa, our guide, and Samad

I first visited New York City as a graduate student and was dazzled by its soaring skyscrapers. Fast forward many years and I found myself gaping at the skyscrapers in Beijing. They stretched mile after mile, like William Wordsworth golden daffodils, in never-ending lines. 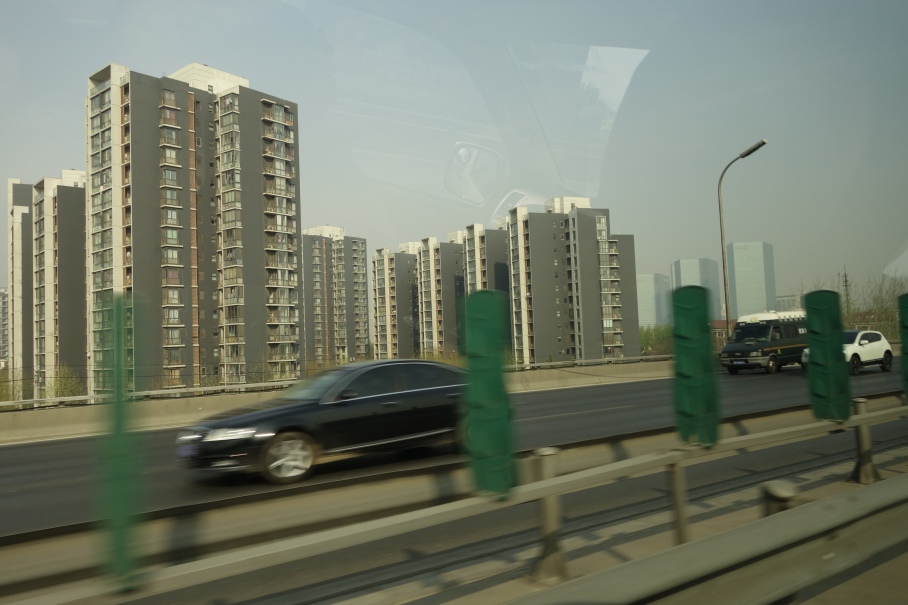 The world’s leading architects have had a hand in designing bold and interesting structures like the Olympic stadium which is shaped like a bird’s nest. Collosal but less attractive is the CCTV Headquarters building. The Zun building to be completed in 2018 will rise to 108 stories.

I found Beijing’s roads equally impressive. Their smooth, glossy surfaces prompted Md Nor to wonder whether they’d been scrubbed and polished till they shone! 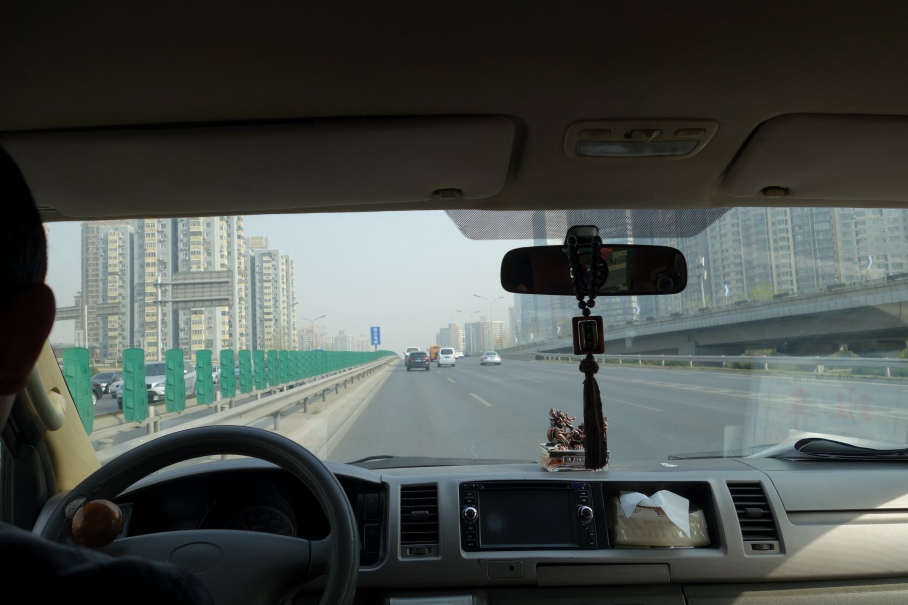 Roads are smooth in Beijing.

I can recall an altogether different kind of road in Cambodia. A good many years ago we were going to the temple complex, Angkor Wat, and our guide kept apologizing for what he called the “jumping” road to the temple. It was indeed bumpy and pitted with pot-holes.

After a long, smooth ride we found ourselves at the Badaling Gate. We had arrived at the Great Wall of China! The country’s most revered national symbol and one of the greatest wonders of the world. It stretches more than thirteen thousand miles from east to west and has a history exceeding 2000 years.

Musa regaled us with stories about its history. One bears retelling, that of Meng Jiangnu. Her husband Fah Qiliang was caught by the federal officials and sent to work at the Great Wall. Receiving no news from him after many years, she went to look for him. She arrived at the Wall and was told her husband had died. Stricken with grief she burst into tears and howled. Legend has it that her howling caused a part of the wall to collapse. She threw herself on the rubble and died.

As we scrambled up the Wall I thought of that young couple and of the many thousands more like them, common folk, whose lives had been claimed by the Wall.

We took a good hour to climb two sections of the Wall. From there we had a breathtaking view of the Wall snaking away across the faraway hills. 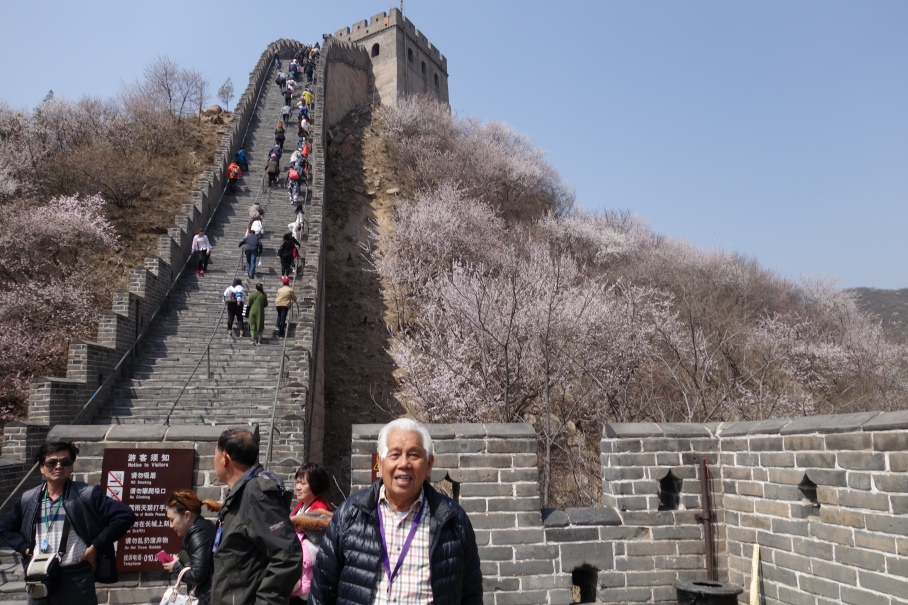 Samad standing in front of the first section of the Great Wall that we climbed.

Kaziah climbed effortlessly. As did the sisters Ani and Rookie. I clutched the handrail tightly all the way up. Maznah was an elegant figure stepping up leisurely in a long skirt.

We were astonished to suddenly see Md Nor bounding up the steps wielding his walking stick like a magic wand! If he was in agony he didn’t show it. He caught up with us and flashed a dazzling smile, as if to say, I did it! 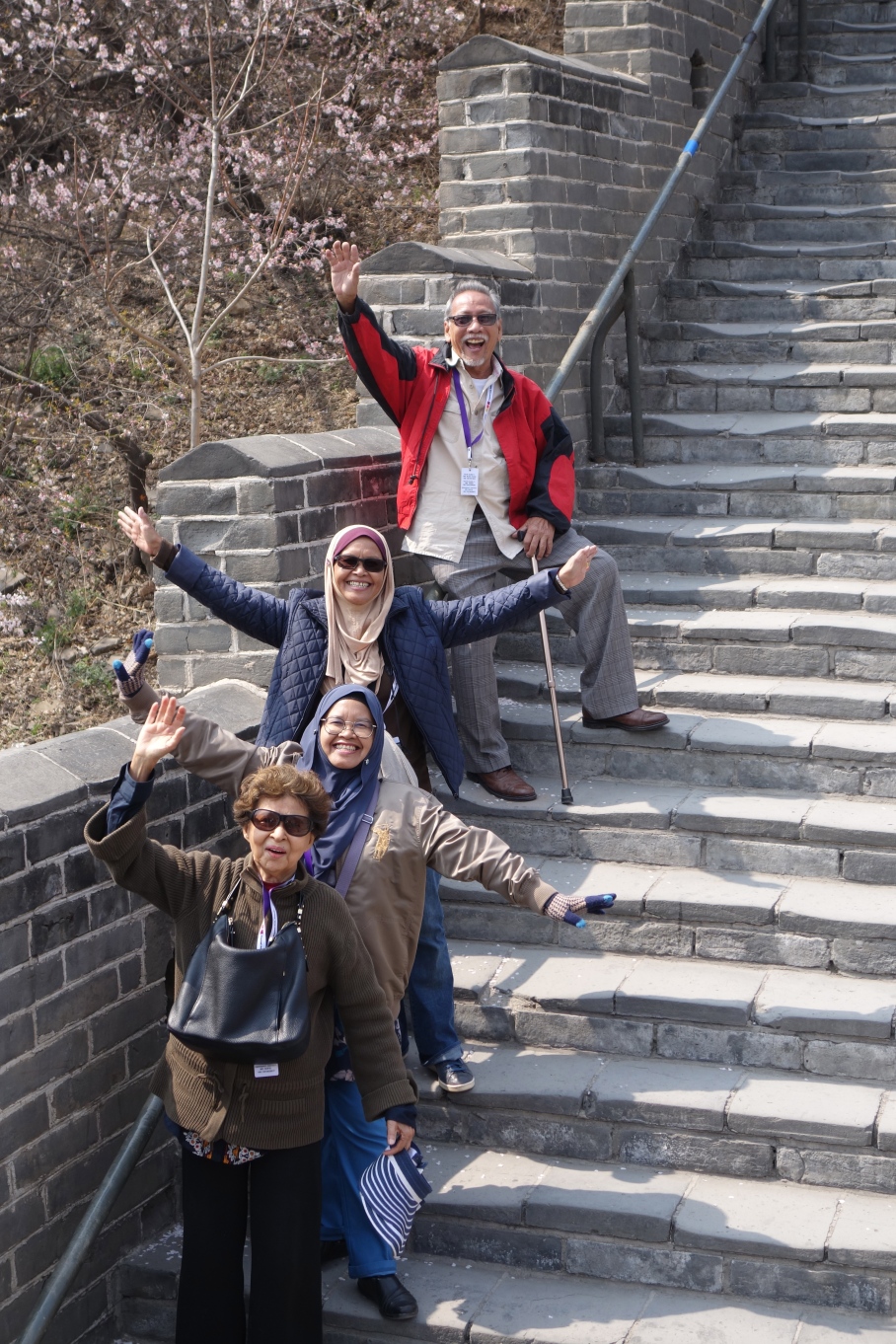 We did it! (From top – Md Nor, Ani, Rookie and Marina. Kaziah, our lead climber, and Maznah are not in the picture).

Samad and Rokiah, decided to give the climb a miss. The uneven width and height of the steps deterred them. Not so long ago Samad had braved temperatures well below zero to climb 17,600 feet to the Everest Base Camp. He made it into the Malaysia Book of Records that year (1997) as the oldest man to reach the Base Camp.

Musa told us in ancient times the Emperor was regarded as the Son of Heaven. His residence was off limits. Hence its name, the Forbidden City. And what a residence it was, with 980 buildings, 9999 rooms, 200,000 eunuchs, and a countless number of concubines.

In 1924, according to an observer, the last 1,500 eunuchs were told to leave, “carrying their belongings in sacks and crying piteously in high pitched voices”.

We’d seen the Forbidden City in the splendid film, “The Last Emperor”. Now we were going to view it in the flesh so to speak. And it did not disappoint. The enormous palace complex was indeed magnificent. 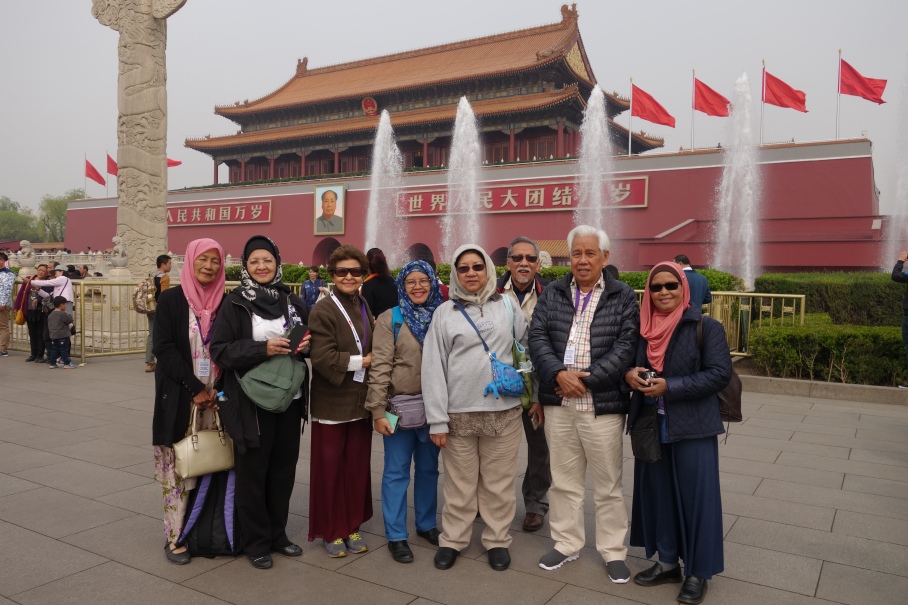 In front of the Forbidden City.

We walked through the Gate of Heavenly Peace across the Tiananmen Square, said to be the world’s largest public square, to the main entrance of the Forbidden City, the Meridian Gate. We entered this massive portal, joining hordes of people, and walked to the Hall of Supreme Harmony, eventually taking a peek at the opulent Dragon Throne. Carved and richly lacquered and decorated with 13 dragons, it stood on a platform with seven steps, befitting the Son of Heaven. 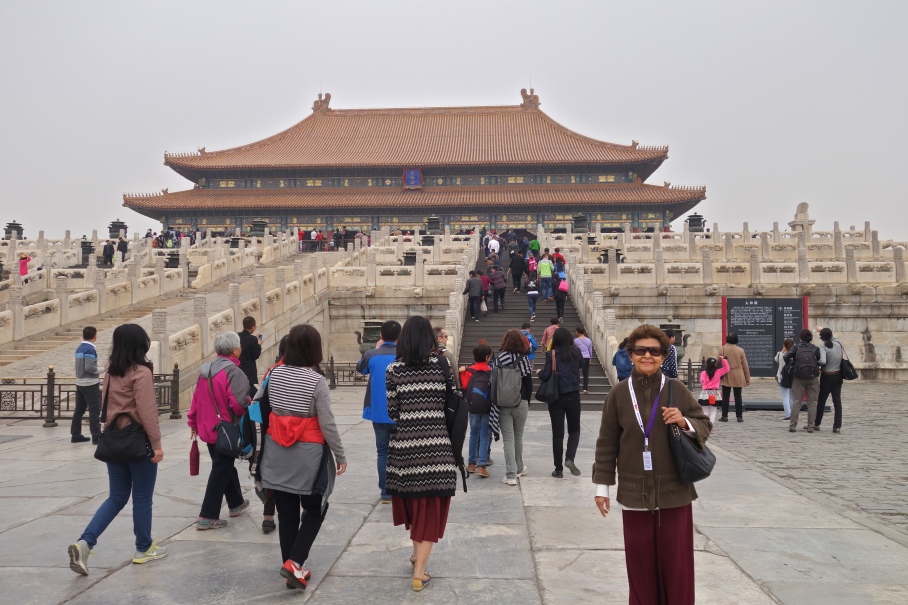 Inside the Forbidden City 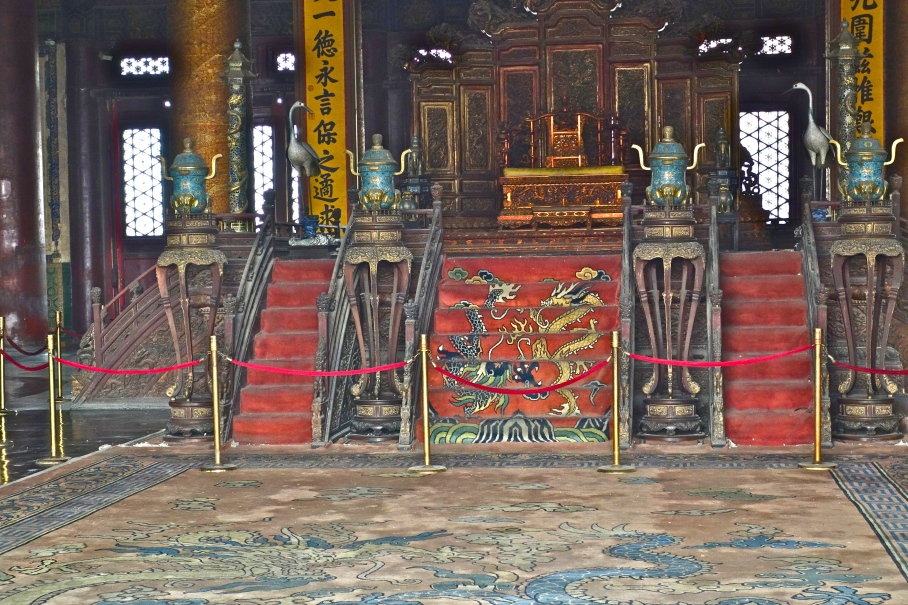 Musa insisted we not leave Beijing without checking out its famed jade and pearl centers. The promoters at these centers showed us in great detail how to tell the difference between a genuine piece of jade and a fake jade and between a lustrous real pearl and a fake one. We browsed through roomfuls of exquisite jewelry but were not inclined to buy.

The Chinese passion for tea is reflected in the many tea shops all over the city. At a place called Dr Tea we were shown how best to use the different kinds of tea they produced. Jasmine tea can relieve a headache while Oolong tea helps with blood circulation. To protect the liver and kidneys we were advised to drink ginseng tea regularly. White tea helps cure a cough and cold. I settled for black tea which soothes the stomach.

At the Bamboo Centre a lively young lady called Jessica gave us an engaging presentation on the many different kinds of things made from bamboo fibre. After she was done we found ourselves piling our shopping baskets with kitchen scourers, wash cloths, tea towels, laundry aids, and towels soft as silk.

Friends of mine who have visited China said they were disappointed with the food there. We, on the other hand, couldn’t have enough of it. Credit goes to Musa for choosing the best Muslim halal restaurants in the city. Top of our list were the spicy beef and chicken dishes cooked Sichuan style blending chillies and peppercorns. The dishes came garnished with exotic vegetables like bamboo shoots. Others came with green and red peppers, or aubergines or asparagus. Our other favourites were prawn kebabs, hand-cut beef and mutton slices and stir-fried lamb coated with sesame seeds. The steamed buns were light and airy. We savoured Peking Duck, the famous Beijing dish, with its thin, crisp skin. 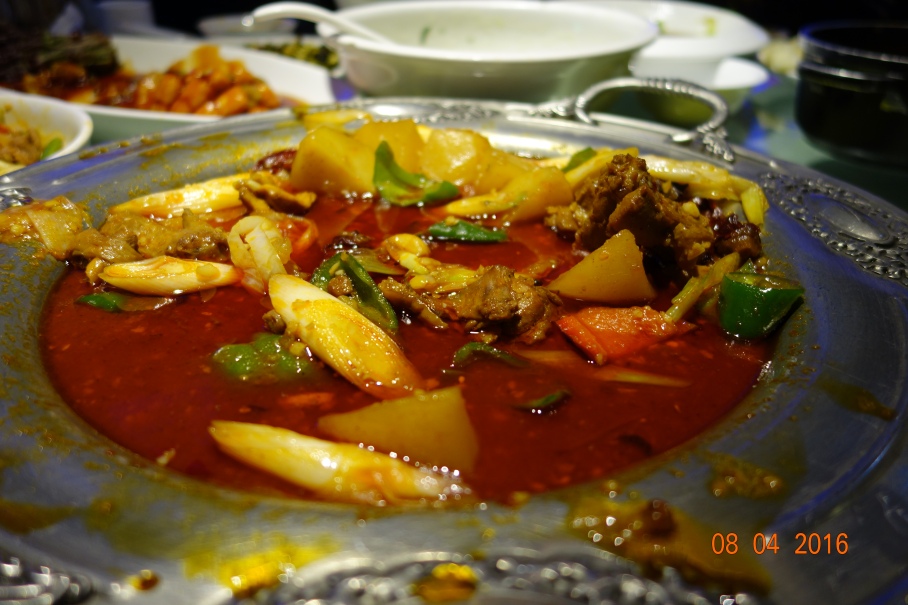 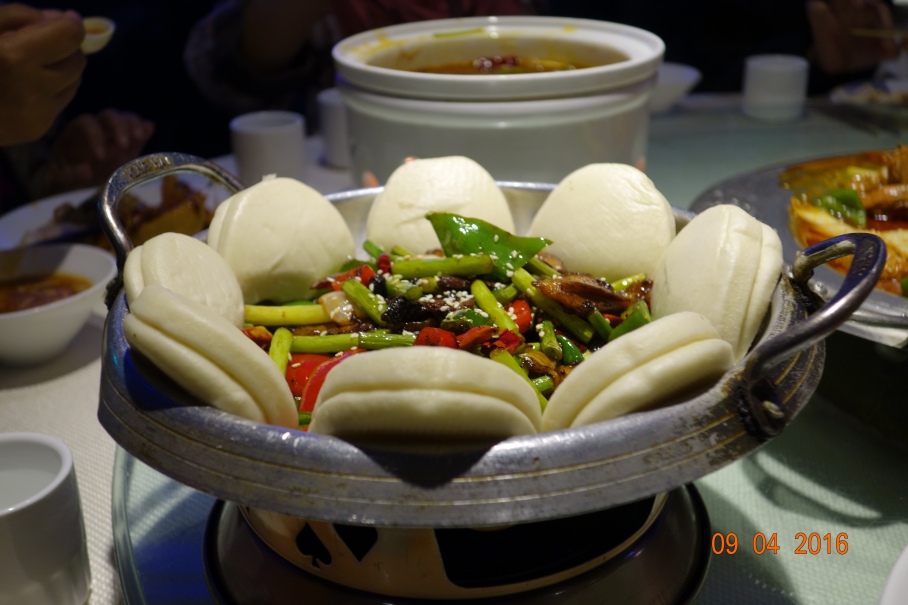 A six-hour ride in a high speed train took us to Shanghai, a modern, cosmopolitan city with many different architectural styles.

The former French Concession reminded us of Paris, with its European villas built along streets lined with trees. We drove around the former British Concession, the first area on the Bund or waterfront, to have Western style architecture and imagined we were in London. The British had arrived there in the late 18th Century to trade in opium. They were quickly followed by the French and Americans.

The Bund which stretches along the bank of the Huangpu River has an amazing collection of classical and modern buildings. From the waterfront we could see Pudong with its forest of skyscrapers, islands in the sky. Formerly farmland Pudong is today a flourishing business and financial hub.

At the Bund, Shanghai.

Musa pointed out the three tallest and most distinctive of Pudong’s skyscrapers. That is the “bottle opener” he said, smiling, alluding to the nickname given to the Shanghai World Financial Centre. The Shanghai Tower soared upwards in a spiral. The Jinmao is probably the most attractive of the three. Another that caught our eye was the curious, pot-bellied Oriental Pearl TV Tower. I imagined myself in a high speed elevator zooming up to the top of one of these giant buildings for spetacular views of Shanghai. 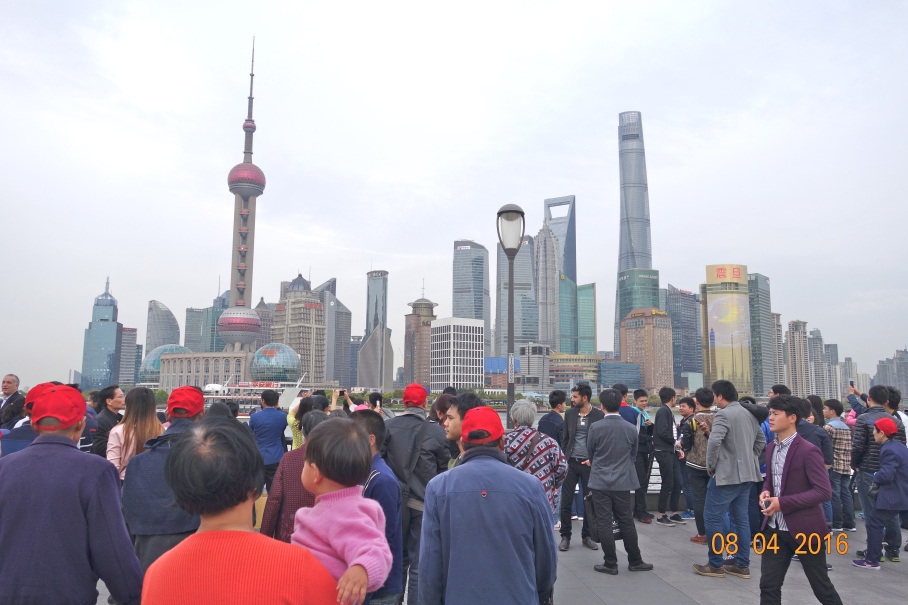 Our last day had arrived. We spent it shopping and filling every available space in our suitcases with our purchases – yards of fine silk, shawls, silk scarves, dried fruit and nuts and souvenirs including adorable Panda soft toys for our grandkids.

Our last stop that day was at a specialty store selling silk bed linen with matching duvets. We loved the gorgeous colors and patterns and the soft rustle of the silk in our hands and were sorely tempted to buy. Sadly there was just no way we could squeeze anything more in our bulging suitcases. Well, maybe next time.

When we got home I happily ticked off Beijing and Shanghai from my bucket list.